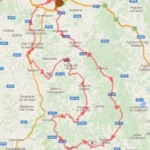 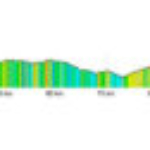 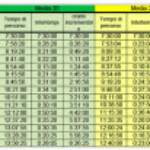 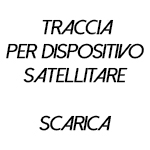 The Granfondo route starts from the centre of Cascine del Riccio village. The route climbs to Pozzolatico for 4.6km and reaches Impruneta with a 5% gradient. The cyclists will proceed to Strada in Chianti and then turn towards Cintoia where they will climb up to La Panca, starting with an easy and soft climb for 6.4km, but once in Cintoia it gets harder with an average gradient of 5%.
Once in La Panca the route proceeds with a downhill track and a few hairpin turns towards Dudda village and continues for 150m before turning right towards Lucolena village. Here cyclists will face the third climb of the course, with an average gradient of 6% and a length of 7.2km. Cyclist will reach an elevation of 746m towards Morellino Valico. From Morellino the route features a sequence of descents followed by a climb that ends up at Radda in Chianti. From here the route will be the same as the individual time trial of Giro d’Italia, through Chianti’s vineyards and on towards Greve. The route contiues with an undulating course for 9km reaching the Cantine Castelli where cyclists will enjoy a break at the food station. After the break, riders will have to face the Leccia climb for 2.6 km with peaks at 15% and continue with a tortuous route towards Monteridolfi. Once passed the “orci volanti” (flying pots), the route climbs down and reaches Calzaiolo, where cyclists will face the San Casciano climb, 4km long and with an average gradient of 4%. After the San Casciano climb the route continues with ascents and descents until Chiesanova and continues down to the finish passing through Galluzzo. 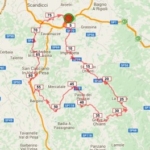 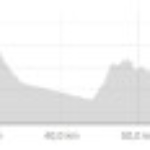 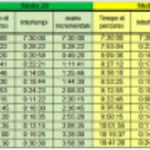 The Medio Fondo Colle del Chianti is an 80km route with a height difference of 1200 metres and a maximum altitude of 530m. The Mediofondo route is the same as the Granfondo until the 26 th kilometre. The route starts at the center of Cascine del Riccio village and proceeds with the Pozzolatico and La Panca uphills. As the mediofondo cyclists reach the crossroad they will turn right and will face the Sugame climb for 1.8km with a 5.4% gradient and then descend to Greve in Chianti village. In Greve the route will rejoin the grandfondo route until the end of the race. 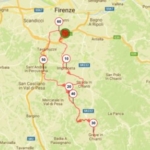 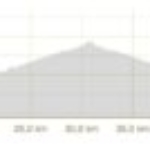 The short course measures around 55km, with an average descent of 550m and a maximum altitude of 337m. Participants will join those riding the intermediate and long courses on the Pozzolatico climb before reaching the town of Strada in Chianti, where the shorter course diverges from the other two courses towards the Ferrone area, after which riders will turn left towards Greve in Chianti. The course is mostly flat all the way up to the town of Greve, where the participants will turn around, again passing Greti, to reach Tavarnuzze. From there, the course proceeds to Galluzzo the last challenge of the day: the certosa sprint, before returning to Cascine del Riccio.

Thanks Cellars Castles of Grevepesa, Formigli cycles for their contribution to the event